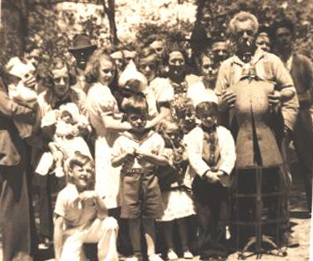 My Great Grandfather was Bill Balentine. He told numerous tales that found their way into oral history. Apparently he had a grand sense of humor. I have heard that he changed his name to Balentine to be named after his favorite beer. I also heard he was married to an Indian woman in Maine and had to leave as the Indian tribe threw him out, then arriving in Massachusetts and starting a new family of which I descend. I have had a few distant cousins contact me to clarify these same stories so I know they were well passed.

I am sure he must have enjoyed painting a picture of himself as someone who had the courage and whimsy to name themselves after their beer, marry an Indian and be chased out of the tribe. But then there are always people like me who come along with a drive and focus to sort out real history and quite frankly ruin really good stories like this. I have to admit, if I could have lunch with anyone in history, he is at the top of my list. I wish I had known him.

I am also reminded that in a group photo he is seen posed with a dress form. His explanation was she was the only woman who would stay with him. My Grandfather told me that his Dad, Bill was quite the prankster.

So now I had the pleasure of attempting to document his lineage. Diving deep into research, I come up only with a mess. I have him as William, William L,. William Loring, William E., Willie E. and William Lorin. I had birthdates spanning a near decade and lots of mistaken written accounts online from other distant family members. Attempting to match names and dates and verify anything at all become close to hilarious.Should I be looking for Indians after all? Add that there seems to be hundreds of William Balentines in Maine, multiple Elijahs,all living in the same area, it seemed difficult to tease out my specific William Balentine.

But my task is complete. I have pulled up enough documentation by way of Census records, Social Security cards, marriage, death, and cross referencing others that were closely related to him. I am confident that I figured him out.

His Father is Elijah J Balentine of York, Maine, originally born in Bethel. Elijah named his son William E. Balentine. We don’t know what E. stood for. We do know that Elijah nicknamed his son,Willie. And for the rest of his life in Maine, he is Willie E. When he comes for Massachusetts, he then goes by Bill in oral history and William Loring on records. Loring was not his given middle name but he assumed it later in life.  He had other relatives that had Loring as a middle name so I wonder the reason. I also wonder if changing from Willie to Bill is the basis for the story about name changes. No way to know.

I have a photo of my Grandfather. I also have Bill, his Dad and now I have Elijah, his grandfather.

I  am continuing to prove this line. Once I am past Elijah, the next few generations have lots of records data so they are easy. Then I hit a line David Balentine that offers a name with no dates, spouse or death. That will be one that requires some real investigation.

And the immigrant, George Balentine of whom I am told received a grant from the King in Virginia doesn’t appear to be right either. If this immigrant is true, he was actually an indentured servant who came over as young man from Scotland lived as a servant to Mr. Burrows and then was released 3 years early in his contract as Mr. Burrows died. He then married a widow, had 10 children and bought land later in life.

We will see as the story unfolds. But for today I am happy to know that Bill was once a boy named Willie.