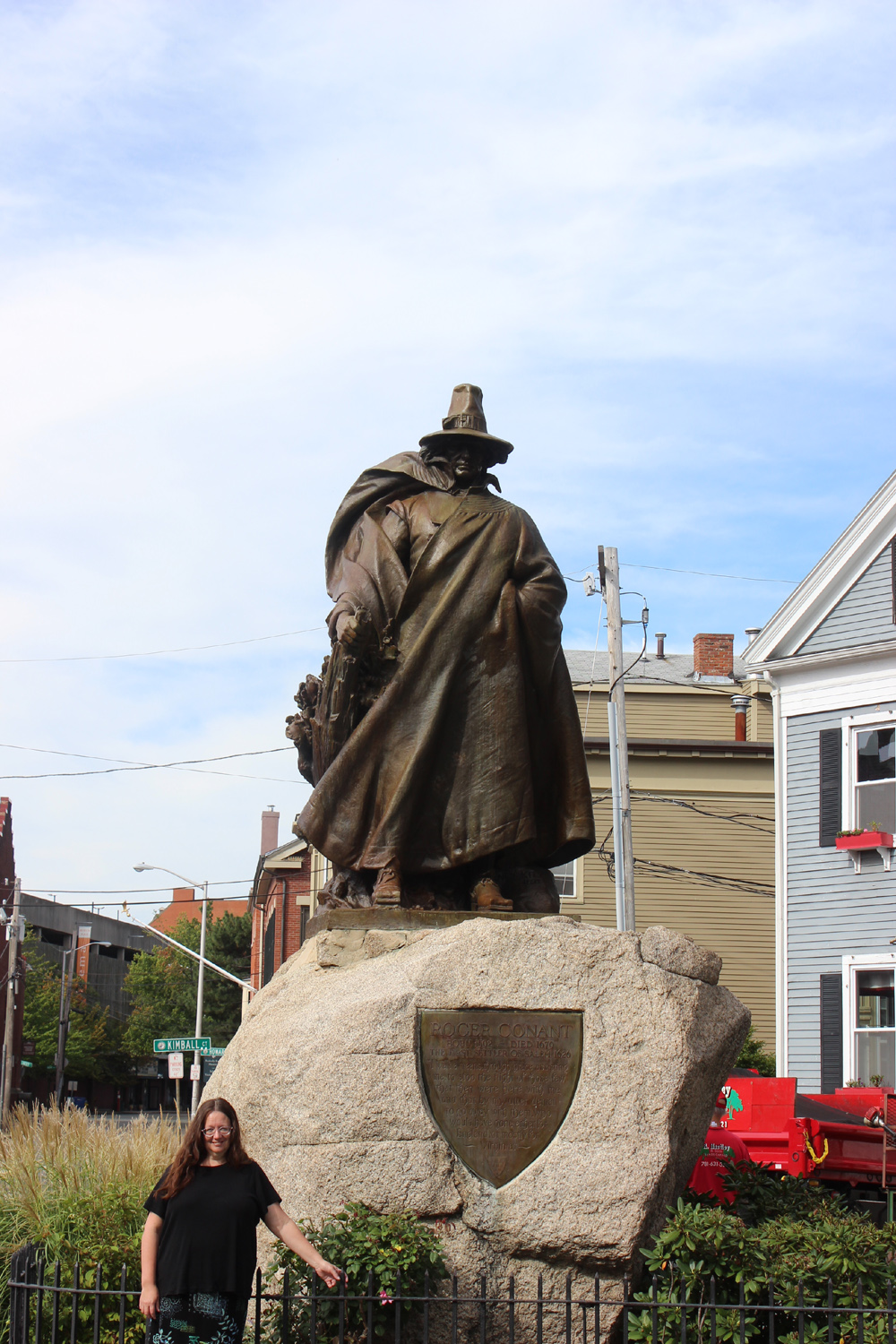 I was thrilled to find out that I descend from early Salem residents. I, like so many, hoped I descended from a witch. Wouldn’t that be cool? Well, no I don’t. But I do descend from a number of original founders. Roger Conant being the most famous one. Anyone who has a statue of themselves is a real find. It is so much easier to teach family history when you have concrete things to show. I think it helps them to feel more connected.

Here is a snippet from Wikipedia, Roger Conant (c. 1592 – 1679) arrived in Plymouth Colony from London early in 1623/24 with the profession of salter. Early in his colonial life, he became associated with those opposed to the Puritan authorities in Plymouth and led the settlement to outlying areas, particularly in the Salem area, which he is credited with founding. He was the first governor of English settlers in Salem from 1626 to 1628.

My descent from Roger is through his son Lot Conant.Lot married the daughter of the Marblehead’s first minister, Rev. William Walton. Lot and Elizabeth then moved to Bridgewater, Mass. and build a homestead there at a time when there were only a dozen families building there. Their family line continues and married into the Whitman family and that line takes me to my Grandfather, Alfred Balentine’s Mother, Laura Whitman.

So my Grandfather who claimed he had no one important in his past, descended from Roger Conant, the founder of Salem and first governor…..(Grampy, check your facts first!…Hahah).

Salem has a statue of Roger at the town green. I wanted my picture taken in front of the statue. After all, he is my ancestral Grandfather. The challenge is the the statue is in the middle of the road. And there is traffic everywhere. It was hard for my friend to get a proper picture without car rooftops covering me up. Help arrived.  A tractor trailer beeped at us, stopped and signaled my friend to go ahead and step into the road. Amazingly all other cars stopped as well. (Was that you Grammy??) With all cars stopped. It was fun and we were quick. My friend stepped into the middle of the road and got a good shot of me. Anything for family history!!! 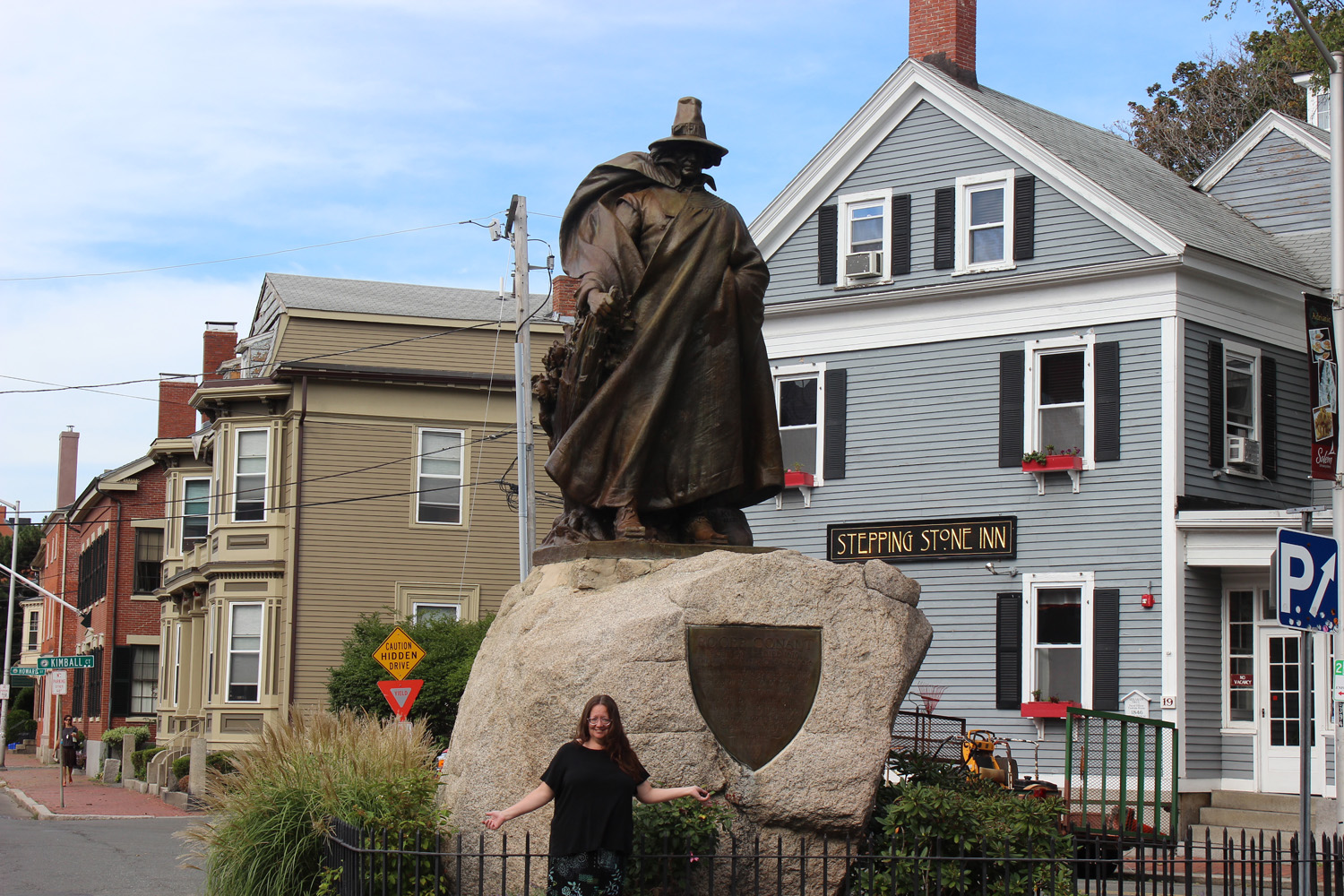 Here I am standing on the triangle of land upon which the statue rests. My friend is standing in the road to get this shot. It looks deserted here but trust me, cars are constantly streaming through. 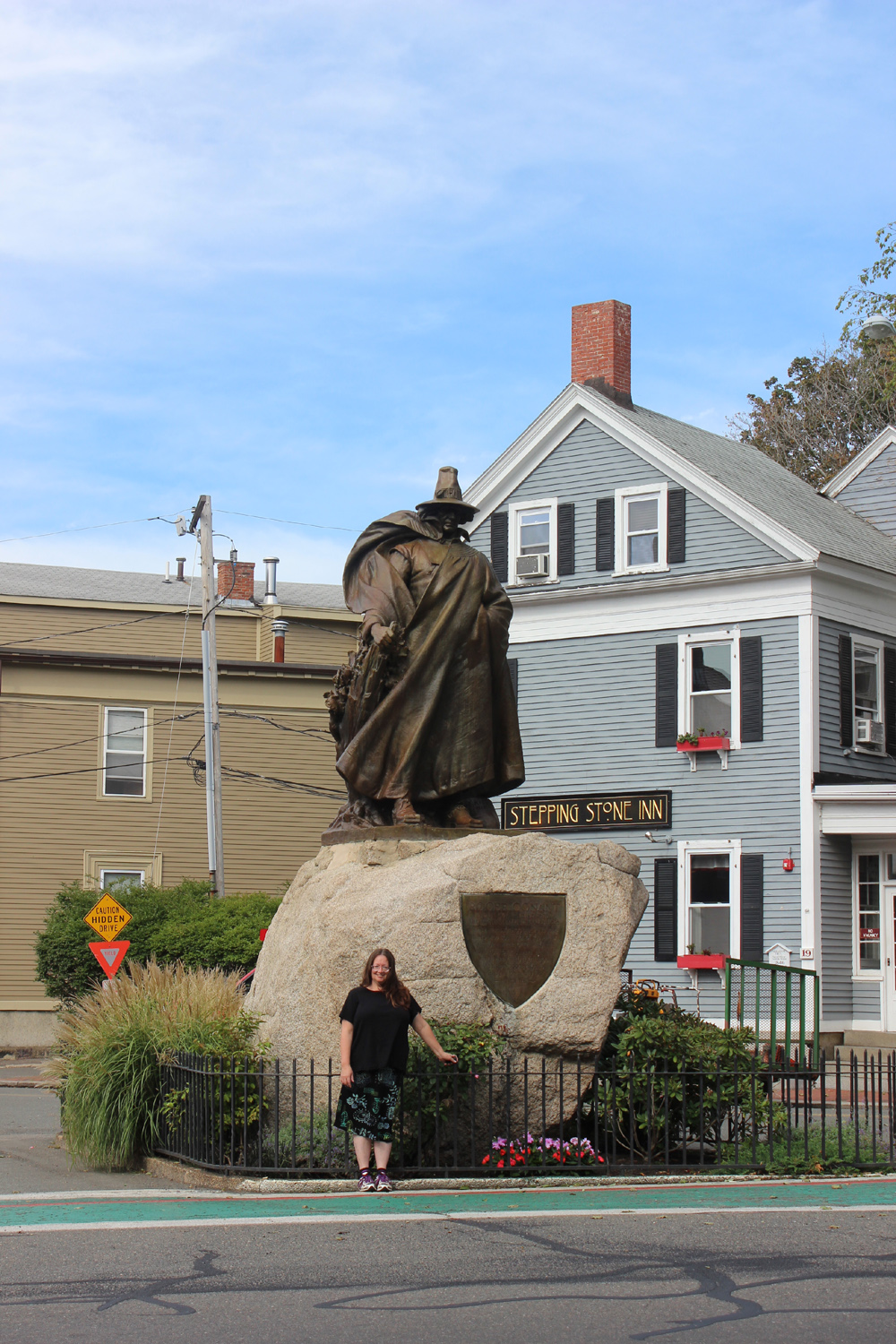 My friend stepped further back to get a better shot of the whole statue base and me, clinging to the railing so I don’t get run over. I should have put my nice shoes on. I was wearing my running shoes for cemetery climbs, traffic dodging, etc.

Being the awesome assistant, Paul knew to get a photograph of the sign in close up. And he was quick, we didn’t make the willing traffic wait for more then a minute or two.

Here is my line to Roger Conant.

Here is the GPS link to his statue, he stands at the green in front of the Salem Witch Museum.